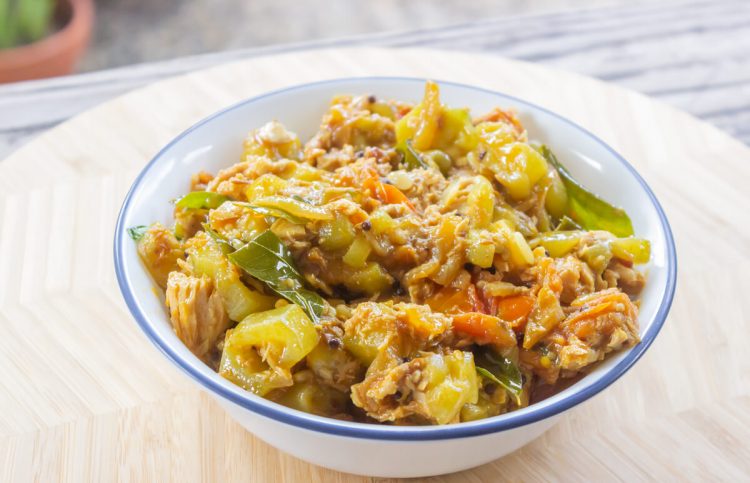 Toroi tuna is a unique dish made with toroi which is a luffa and mixed in with tinned tuna. It may not be as popular as something like gobhi tuna (English cabbage and tuna) but tastes great, maybe even better. If you love the taste of tuna curry, you may really enjoy this recipe too. We use premium tuna chunks in oil when making this recipe as it doesn’t overpower the taste of the toroi. With stronger smelling tuna, the flavour of toroi will be masked and may not taste quite right. This recipe is not too common in Fiji and perhaps was an experimental discovery by some families – including ours. The right balance in flavour is not difficult to achieve either and you can add or remove the ingredients that you don’t like. There are no hard and fast rules for this one.

Toroi tuna does not use too much spices or masala and is lightly flavoured. As mentioned above, we want to preserve the flavour of the toroi and not mask it. When the tinned tuna is added to the pot, we don’t want to cook it too much longer as the tuna comes ready to eat and can become dry and overcooked. Also make sure that there isn’t too much water left in the pot before adding the tuna or it will become too soggy. On the same note, when adding tuna, you can choose to drain its oil or leave it as is. We prefer to use the oil when it has been infused with chillies as it houses a lot of flavour, otherwise it is best to discard the oil – but it comes down to personal choice.

If you’re living overseas and find it difficult to find this vegetable at local shops, try finding an Asian grocer. They usually sell toroi as it is a part of their diet too. You can also grow your own toroi like we do in our backyard – granted we have fantastic weather during Summer and it helps with the growth. Toroi takes a few weeks to grow and spread but once it has established its tendrils on the trellis (or tree branches in our case), the flowers will bloom and the toroi won’t take long to form from there on out. Toroi can grow triple in size overnight and will be ready to harvest within 3-5 days. Don’t let the skin harden too much or leave it too long as the seeds will harden and the flesh will become inedible. To cook this recipe, make sure you peel off the hard skin but you can use this skin to make chutney (a family recipe too)! You can completely use the whole vegetable without wasting anything.

Let us know in the comments what you thought about the recipe if you’ve tried it or have a similar family recipe.

Bula! Raised in Fiji, living on the Gold Coast, Australia. Love photography, travelling and food! I'm here to bring the beautiful food of the islands to your home. Join me on my journey to discover that Fiji taste!

Let's connect on any of these social networks! thatfijitaste
•
Follow
Happy Diwali to everyone celebrating today! We hope you enjoy sweets and good times with family and friends ❤️
View on Instagram |
1/6 thatfijitaste
•
Follow
Thank you to all our viewers! We have raked up 10,000+ views on our Green Apple Achar video on YouTube! We are glad you love it as much as we do 🥰 Watch full video on YouTube by subscribing to our channel! Link via bio (on website). . . . #greenapple #achar #pickle #fijistyle #fijifood #fijian #fijiindian #fijirecipes #thatfijitaste #islandfood #indianpickles #youtube
View on Instagram |
6/6
View on Instagram